The inspiration behind this painting of cherry blossoms is a true story that happened in my life and my family in Japan. It is my hope that you will be encouraged and be blessed.

Some of us cling to hope because it’s all we have in this life. This is all we did have at first when we heard the devastating news about the earthquake and tsunami hitting Japan on March 11, 2011. My relatives live in the area where the tsunami hit. It left over 20,000 dead. For three days we scoured the internet looking through the list of names that were found alive to no avail. We were looking for my cousin Cheiko and her mother Shizuko who lived in the Ishinomaki, the coastal town where the earthquake and tsunami hit. The tsunami was up to 128 ft. high in some places and stretched 6 miles inland. 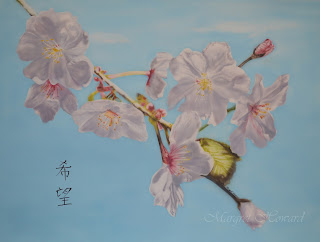 My mother and I prayed that they would still be alive. Even though we didn’t hear anything, we remained hopeful.

We found out later that a man on a boat went by as my cousin Cheiko and her mother Shizuko were on the 2nd floor of their house trying to avoid the flood. He asked if they wanted to come in the boat. They replied, “Yes!” He carried my aunt since she was wheel chair bound. They went to a nearby town and stayed at a school. They received a bowl of rice and one strawberry. Cold and tired, they remained there.

On the third day after the tsunami, my cousin Kishiro finally found his cousin Cheiko and Aunt Shizuko. Love and determination spurred him on. Phone lines were down and many roads were impassable. He finally found them in the school. They had their heads down looking at the floor when he saw them. They were overjoyed when he came to them! He was a familiar face come to rescue them! We were also overjoyed to hear the wonderful news that they were safe!

Faith, Hope and Love. “Three things will last forever - faith, hope and love. - and the greatest of these is love.” 1 Corinthians 13:13

He provided a place for them to rest at his home in Shiogama, giving them each a hot bowl of rice. Exhaustion hit them as they slept for an entire day. When they awoke, they decided to go home and rebuild. After numerous obstacles they were able to rebuild in time, as well as much of Japan.

In late March when there were some cherry blossoms that bloomed, it was a shock to some of the Japanese people. It caused them to look up. It was hope renewed in their hearts. All through Japan's history cherry blossoms have represented new beginnings, hopes and dreams. The blossoms are beautiful enough to take one's breath away and then soon disappear. Cherry blossoms stir up their emotions and have a special place in the hearts of Japanese people. The Japanese name for cherry blossom in Japan is Sakura. Since the tsunami, thousands of cherry blossom trees have been planted on the coastline where it took place.

Renewed hope comes after the winter as each spring Sakura fills the sky.